From an email from Phil Williamson covering developments and events relevant to the Shelf Sea Biogeochemistry researchers.

After a break in June, the SSB cruise series on RRS Discovery resumed in early July with a mostly-pelagic cruise led by Mark Moore (DY 033), followed by the current, mostly-benthic cruise led by Henry Ruhl (DY 034). Excellent progress has been made to date on DY034, with the four main benthic sites already sampled and two SmartBuoy systems successfully recovered.  RRS Discovery is due to return to Southampton on 2 September, at the end of what is probably the most intensive and ambitious field campaign ever funded by NERC.  It has already delivered a wealth of information, and there is much more to come when data and samples are all fully analysed.  Congratulations to all cruise leaders and participants!

As part of NERC’s 50th anniversary programme, RRS Discovery will be in London (moored alongside HMS Belfast, near Tower Bridge) 8-10 October for both public visits and invitation-only events.  Onboard science displays cover a very wide range of activities.  These will include a SSB exhibit on plankton and the carbon cycle, led by Jonathan Sharples, also on-deck display of a Smart Buoy and other sampling gear.  A much wider range of SSB exhibits was offered, but unfortunately there wasn’t space to include them.

All researchers who are directly involved in the SSB programme (either through research grant awards, research studentships, SSB cruise participation or SSB programme management) are invited to the 2015 ASM, to be held at PML,  Plymouth on Tuesday 24 (from 09.30) and Wednesday 25 November (until ~16.00).  The purpose of the meeting is to review progress made, particularly through the cruise programme. Whilst it is not expected that all data and samples will be analysed by then, this will be a key meeting in assessing initial results, strengthening links between WPs, and establishing whether or not SSB’s main components, and the programme as a whole, are ‘on track’ to meet overall objectives.

Online registration and further information for the ASM will be available in mid/late September via SSB pages on the NERC website, including a link to Plymouth hotels near PML.

Abstracts are invited for session #9277 (EC017) “Physical and biogeochemical processes and the support of shelf sea primary productivity and carbon cycling” at the 2016 Ocean Sciences meeting, jointly organised by AGU, ASLO and TOS, and to be held in New Orleans.

The session will be co-chaired by Jonathan Sharples, Richard Sanders and Katja Fennel (Dalhousie), and the deadline for abstracts is 23 September.
Unfortunately it is not currently anticipated that there will be any additional SSB support for participation in this meeting, other than via existing awards.

Cruise DY034 has now come to an end, and with it the end of most Shelf Seas Biogeochemistry Programme field work.

From my perspective, this cruise has been a resounding success. Not only have I learnt a lot of scientific procedures and successfully sampled from CTDs, but also the other scientists have given me a good understanding of their work. I thoroughly enjoyed occasionally helping out with coring and trawling, as I found it fascinating to see the benthic fauna up close. I also enjoyed analysing some of the seafloor photos taken by Autosub. I was interested by the principles behind getting profiles of oxygen and iron concentrations in sediments, nutrient analysis, learning about multibeam and sidescan sonar mapping, as well as the role of gliders and benthic landers in collecting observations independently from the ship. 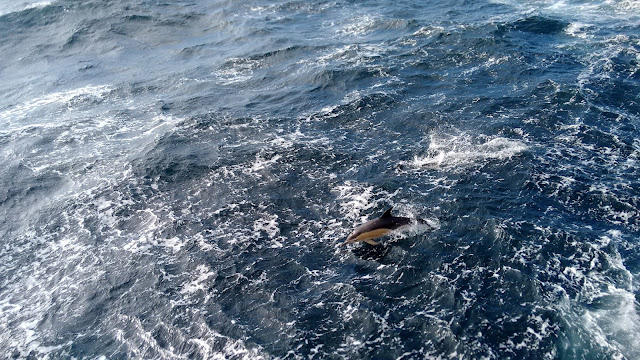 Outside of the science, this cruise has been a great experience in itself. The stunning sunrises and sunsets, meteor shower and seeing dolphins for the first time kept me going through the tougher days. I have also met a load of great people, who have all made me feel very welcome, and it would be a pleasure to work alongside any of them in the future.

I would like to thank all of the scientists, technicians and crew who made all of this possible. I know more than ever about what it means to be a marine scientist. For all those who have not been on a research cruise before, I would recommend it with the upmost enthusiasm.

I am shortly going to return to my studies, and I await my next cruise opportunity with great anticipation.
Posted by Unknown at 11:40 No comments :

Heading back to Southampton

We've now finished our SSB sampling and we are headed towards Southampton. Many of us are now transitioning from taking and processing samples and preparing equipment for use, to writing up reports and packing for mobilisation back to our respective home labs.


Our thoughts often mix between reflecting on the expedition to getting back to our lives ashore. It's nonetheless a critical time as we want to ensure that all the work we've done has been well documented and that samples and data are archived properly so they can be of best use for years to come.

Below are some additional images of the sea creatures we found in the Celtic Sea during our sampling.