36 years of working on Discovery

By Peter Statham
Ocean and Earth Science, University of Southampton

When I first set foot on the old Royal Research Ship Discovery in 1979 in Cape Town I had little idea that in 2015 I would be on the Discovery once again but now on the most recent version of the vessel to carry this famous name.

I am interested in the chemistry of the ocean and how chemical processes affect the biology and other parts of the marine system. This aspect of oceanography is important in terms of understanding how the sea works and can be impacted by climate change.

On this trip we are studying where the essential nutrient iron comes from on the shelf and how it may move away into the open ocean.  In some areas the element is at such low concentrations that it limits plant growth and thus impacts ecosystems, so it is important to know where it comes from, and one potentially important source are the edges of shelf seas.

Whilst frequently demanding with long working hours I always enjoy the times at sea with the wide range of people on board, the constant challenges to be dealt with and the buzz when a long planned experiment finally works out.  Whilst new techniques such as satellites and gliders are developing rapidly, ships are still essential tools in the study of the oceans. Discovery is a world-class research platform for UK marine science that will support our new generation of oceanographers into the future.
Posted by Unknown at 08:00 No comments :

The day of dolphins and trace elements

Wednesday was our last day at Station A before heading to station G.  Half way through our third CTD of the day we were ambushed by a pod of common dolphins. The dolphins stayed around the boat for most of the morning and into the afternoon, with one theory being that they like the way the waves break around the ship. Aside from all that cetacean excitement some science also got squeezed in to the day’s events.


Today was a day of trace elements, complete with their ultra-clean CTD, ultra-clean labs and ultra-tired scientists! For some background to the marine study of Iron, including why we are looking for it and why it is so hard to measure, there is an excellent summary written for this blog by Jonathan Sharples during one of the previous cruises – see post titled ‘Sampling Iron’ written on 15th November!

As mentioned in Jonathan’s blog post we believe that one major source of Iron is resuspension from sediments on the continental shelf. The edge of the continental shelf can be thought of as similar to a vast desert on the edge of a gigantic cliff face, with the water depth increasing from just a few hundred metres to distances measured in kilometres as you move from the shelf edge towards the open ocean.

Currents and waves cause particles of sand and mud on the sea floor to be lifted off the seabed and mixed into the water column above, and these can then be transported off the shelf edge in giant plumes of resuspended particles. The last cruise found evidence of currents along the sea floor of the continental slope which were pulling sediment off the seabed and causing it to mix in the water column above.

On this cruise one thing we are measuring is the concentration of Iron in the shelf sediments, which can be compared to Iron concentrations in sea water above to work out how much Iron the sediment is supplying the water column each year. As phytoplankton growth (and thus, primary productivity) is limited by Iron in 25% of the open ocean, a better understanding of the processes which supply Iron to ocean waters is important to understand how primary productivity in the open may change in response to climate change.

The importance of zooplankton poo

At dawn this morning we reached the end of the iron sampling transect, crossing onto the edge of the continental shelf at a depth of about 250 metres. Quite a stunning sunrise, with flat calm seas. Not what you’d expect for November. The dreadful-looking forecast for the end of the week also appears to have dissipated, so we might be able to push our work further north into the Celtic Sea.


We are about to head southeast for an hour or so, to return to the shelf edge site that we spent 3 days on earlier in the cruise. We need to repeat some of the Snowcatcher work there, and also the zooplankton biologists on board want to find some more salps and jellyfish to try out some experiments to determine how much they are eating and also what happens to the waste material that they excrete. I’ve asked the children at Churchtown Primary School in Southport to have a think about this problem – how quickly does a salp waste pellet (i.e. a salp poo) sink through the sea? It’s an important thing for us to know about. A fast sinking particle doesn’t give the bacteria in the water much time to breakdown the organic material before the pellet reaches the seabed. A slow-sinking pellet can be broken down into inorganic material before it reaches the seabed, and that inorganic material is then returned to the water where it is accessible to the phytoplankton. Also, sinking quickly means that the carbon in the pellet is removed from the ocean surface (and the atmosphere) very quickly – you could argue that the stability of Earth’s climate owes a great deal to zooplankton poo.

End of the iron line

We have nearly finished our transect sampling iron from the deep ocean back to the shelf. The iron group is fairly excited, because in all of the profiles we have done gradually working along and up a seabed canyon there has been evidence in the CTD data of lots of suspended particles near the seabed. There must be some flow of water down there that is pulling sediments, along with trace metals such as iron, up off the seabed which is exactly what the scientists are looking for.


Other lab work continues also, as the iron chemists need to know what else is happening in the water to help understand what they are seeing. Chata, a PhD student from the University of East Anglia, has spent the past 3 days trying to fix a machine she uses to measure argon, oxygen and nitrogen gas dissolved in seawater. The machine is refusing to work properly, so she is having to store samples for analysis later back at University. Oxygen and argon behaviour similarly in seawater, and in the rates they can be transferred from the atmosphere to the ocean. However, oxygen also has a biological component to how it changes – if the ocean’s microbial plants are growing, then (like all plants) they produce oxygen. Chata can compare what she sees the argon and the oxygen doing in the water, and any differences between them will tell her about how the biology in the ocean is working. She is also helping us by doing chemical analyses of water samples to measure the oxygen concentration, which will allow us to calibrate the oxygen sensor that we have on our CTD.


Due to finish this transect at about 0100 tomorrow. We then plan to start th second of our main study stations, this time sat at the edge of the continental shelf.

Starting in a depth of 2,500 metres we now plan to sample the concentration of iron in the sea at several stations, gradually working back towards the continental shelf. It might seem like an odd thing to look for, but iron is a vital nutrient to the microbial plants in the ocean. The plants only need it in minute concentrations, but in some parts of the ocean there is so little iron that the plant growth is inhibited. This was a big mystery in oceanography for a long time – there were areas where there was plenty of sunlight and plenty of the main nutrients (nitrogen and phosphorus, the sort of things you might give to plants in your garden), but very little growth of the ocean’s plants. Demonstrating that lack of iron was the problem took a long time because it is so difficult to measure iron without contaminating samples (for instance, with iron from the research ship). The CTD used to collect the seawater for iron analysis is entirely made of titanium and plastic, and the bottles on the CTD frame are always stored in clean conditions rather than being left on the frame as we do with the steel CTD. All of the iron analyses are done in a special clean chemistry lab on the ship, with the scientists having to wear very clean lab coast and gloves, and particularly attractive hats. Nobody is allowed into this lab without the right gear.

Iron is not a problem for the microbial plants that grow in the shallow shelf seas. The reason we are sampling iron is that the continental shelves are thought to be sources of iron for the adjacent open ocean, possibly resuspended in sediments from the seabed of the shelf and the deeper waters of the shelf slope where we are now.
Original post 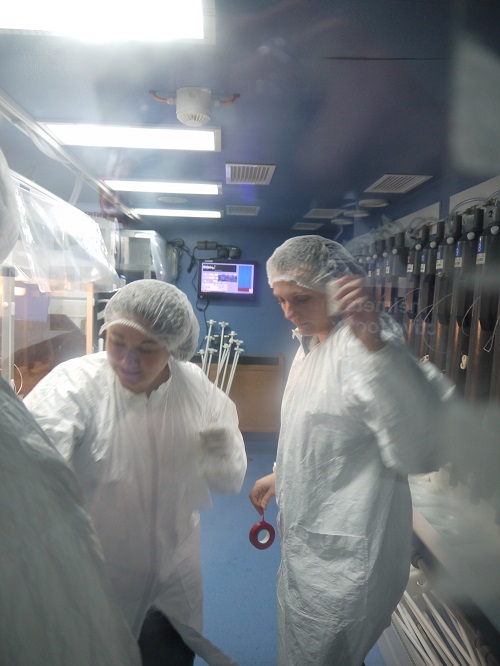 Fantastic weather today. Winds 5 – 10 knots, and we have lots of blue sky. Other than a long, 2 metre swell you’d have to describe the sea as calm.
We have a group on board, led by Maeve Lohan from the University of Plymouth, who are going to measure the amount of iron in the sea. Iron is a nutrient that the microbial plants in the ocean need. It occurs in the ocean in very small concentrations, and so is a real challenge to measure. Much of the challenge is because ocean scientists need to make the measurements from steel ships, so there is huge potential for contaminating the samples with iron from the ship or our equipment. 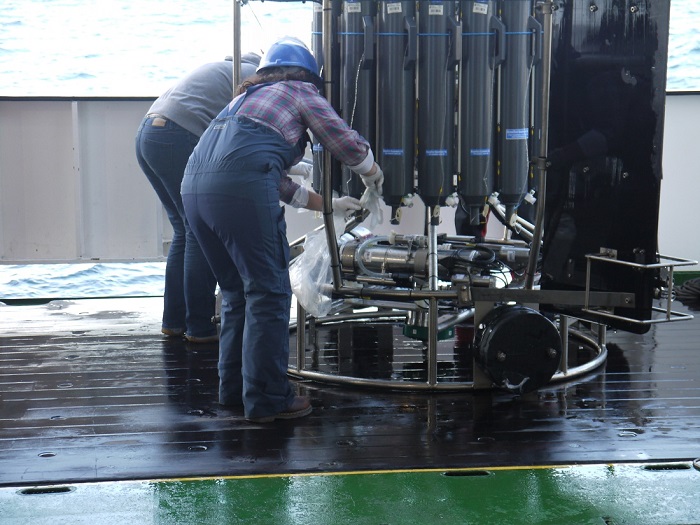 The instruments used by the iron scientists are all made from titanium or plastic, and they do all of their work is a special “clean lab” on the ship, into which the rest of us are forbidden to go. When their titanium instruments come on board after collecting water samples, Maeve and her colleagues rush forward with a bag of polythene gloves which are all put onto the taps of the sample bottles so that they don’t get contaminated while on deck.
Original post
Posted by Unknown at 17:00 No comments :