Around the drama of Wednesday afternoon (see Lucie’s recent blogpost), the science on board continues apace. Over the 5 intensive days of science to date we have already completed 72 ‘Events’ each of which effectively corresponds to a deployment of one of the many pieces of equipment which you may have read about during previous log entries, including deployments of moorings and gliders, CTDs, net sampling (see picture below) alongside snow catchers, in situ pumping systems, etc, etc ....

With all this activity occurring on board it is important that we keep detailed, accurate and up to date records. The first stage in making sure everyone knows where we are with planned activities is a running event log which we keep in the main lab of the ship (see picture). Here we provide a rough record of what has happened to date, allowing the person leading the next activity to confirm the event number and providing a record for checking against more detailed logs. Simultaneously the officers on watch also keep a separate ongoing record of all activities from up on the bridge. One of my jobs as principal scientist then involves keeping a check to make sure that all these logs are aligned. It pays to have multiple redundancy as although a research ship is a reasonably small space, with everyone working in different areas of the ship and at different times of the day and night effective communications can sometimes still be a challenge!

Work wise we are currently around half way through another of our CTD (Picture) sampling transects down the shelf edge aimed at understanding the processes by which iron (Fe) may be transported off the shelf. Working where the water depth shoals so steeply has its own challenges. We have to be extra careful lowering sampling equipment near to the bottom as there are regions of the shelf break where the water depth can change by 1000m in under a km, i.e. a >45% slope!
Posted by Unknown at 21:03 No comments :

We had a very successful day yesterday – managed to get through all that was planned, plus most of what I’d planned for the next day as well. Deploying the moorings began shortly after 0800. This tends to be a long, careful process as the mooring wire is gradually unwound over the stern, instruments are clamped onto it at the planned depths, buoys are slotted in at key stages to hold it all up in the water, and then finally the 500 kg clump of chain is attached and dropped into the sea. By lunchtime we had deployed the long temperature/salt logger mooring and also the bedframe with the current meters. The second current meter mooring has been delayed until today, while the techs sort out an issue with the memory cards that it uses. That allowed us to go and hunt for the wandering wirewalker mooring and also the glider that we deployed when we first got here from Falmouth, but which has refused to dive. 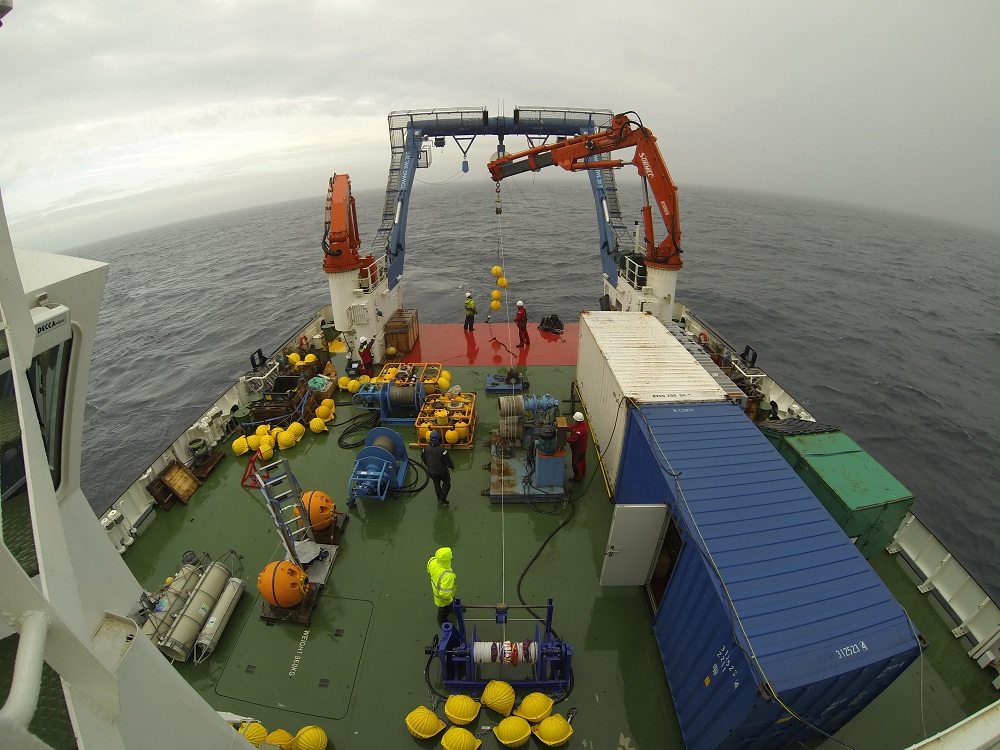 Both the wirewalker and the glider have been sending us regular position information via a satellite link, which meant that finding them and getting them on board was very quick. We arrived back at the mooring site just after sunset, ready to do some more zooplankton work.

It’s a lovely day today – a glorious sunrise (complete with dolphins) and an almost flat sea. However, we’ve just heard that the long-term forecast is looking a little grim. A particularly nasty-looking low pressure system is due this side of the Atlantic next weekend. Forecasts that far out tend to be a little uncertain, but it’s worrying enough for us to think carefully about when we can get back to this site to recover the wirewalker and the 2 gliders that are here.

Off to collect the moorings

We finished off the work at the shelf edge station with a set of samples collected using the Marine Snowcatcher. Quite a long process, with a good few misfires of the sampler, but all of the samples needed were eventually collected. At 0200 this morning we did another of the “pre-dawn” samples, collecting water from different depths to measure plankton growth rates and nutrient requirements, and the nutrients dissolved in the seawater. This was earlier than we would normally carry out pre-dawn work, but we need to get back up to the moorings further on the continental shelf with sufficient daylight to recover them all. We are due at the mooring site just after 0900. We’ll first collect a CTD profile of data adjacent to the moorings, which can later be used to help calibrate the mooring data, and then we’ll begin what will likely be a full day of manoeuvring and collecting the 3 mooring components.


We have a couple of hitchhikers aboard. Two storm petrels were found resting in the hangar by the CTDs last night. Both are currently having a sleep in a cardboard box, and Clare Davis is hopeful one of them will be OK to fly off later today. A few days ago we had an owl flying round the ship. Very exotic – cruises out here usually only attract tired homing pigeons.

Here’s a question for the year 3 ocean dynamic students back in Liverpool University. The water out here by the moorings will soon be completely vertically mixed, and I want to estimate the date when that will happen. The water is 150 metres deep, with a surface layer 60 metres thick and density 1025.6 kg m-3, and a bottom layer 90 metres thick and density 1026.0 kg m-3. The average tidal current amplitude is 0.45 m s-1, average wind speed is 12 m s-1, and the heat flux across the sea surface is 100 W m-2 (a heat loss to the atmosphere). That’s all the information you need, along with a handful of constants that are in your notes!